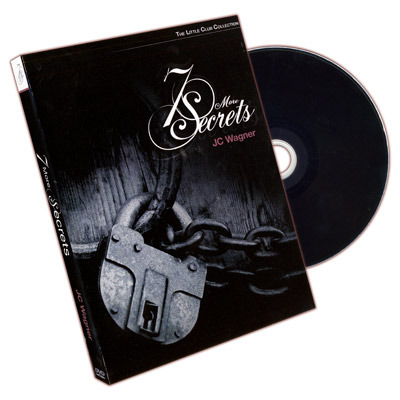 Underground Transposition II -This is an updated handling of a wonderful effect from Commercial Magic. This method removes the cop, palm and switch required in the original handling!

Another Four Ace Assembly -Combining a Bruce Cervon idea and the original lay down sequence from “Honest John’s Aces” (Super Magic), this Ace assembly features a fair opening procedure and an ending of the O’Henry variety!

Revisited Christ Aces -An updated handling of Henry Christ’s “4 Ace Routine” that you can do at anytime in your performance! If you liked “Fabulous Four Aces” from Commercial Magic, you will love this new handling.

The Vietnam Card Trick -This is the routine JC has used for the past few years to completely fry magicians and laymen alike. An effect originally sent to the Professor from a soldier stationed in Vietnam, this updated handling turns this puzzle of a magic trick in to a true miracle.

Re-Figured Pre-Figuration -This is JC’s handling of a tested Jennings effect from Classic Magic. A prediction card is placed aside and each of its three mates are located in a baffling manner by the spectator. This method, coupled with an idea of JK Hartman, makes for a clever and commercial card routine.

Not only does JC teach the above routine, but with the permission of the late Jules Lenier, he throws in an added kicker finish (created by the great Jules Lenier) that JC has been using for the past 25 years!

Ace, 2, 3, 4…but only Four -This routine, varied from the original published in 7 Secrets, combines ideas from both JC Wagner and Syd Segal to create a devastating small packet effect with a beautiful transposition finish.

BONUS TRICK: Updated ITH Triumph (explanation only) -JC explains his updated handling for his in the hands triumph routine that he debuted at the 2003 MacMillan International Convention.