Have you ever wanted to see auras?

Spiritual masters such as Chunyi Lin and Marie Diamond see auras. They literally see the energy that makes up and surrounds everyone and everything.

Chunyi, who began seeing energy as a child, uses his ability to help see health problems.

Marie, who was born with the ability, uses it to see the energy in homes and workplaces for Feng Shui purposes and to guide her students on their spiritual path.

If you want to learn to see auras on your own, it could take seven years of training in a Taoist temple…up until now.

You can learn to see auras. Not in seven years. Just a couple of days.

Here at Learning Strategies we’re about simplifying and accelerating processes, and that’s what we’ve done for you. Now you can learn to see auras in as little as a weekend.

Three years ago we began working with Brian Osborne, who has trained for over 30 years in Eastern, Shamanic, and Western Esoteric Traditions. Brian even spent seven years in a temple, where he learned to see auras, primarily for his private healing practice. Last spring we had a breakthrough that we presented in a weekend seminar—and 100% of the participants saw auras before they went home.

Brian, Paul Scheele, and our team of writers and program developers spent the last year creating an amazing course that you have to check out.

Simply begin with the first audio session and work your way to the end, and you will be seeing auras. You can even do this in one weekend.

How do you learn to see the energy?

Seeing auras involves a combination of training your eyes to see subtle energy and opening your third eye, located in the partially dormant pineal gland in the center of the brain behind your eyes.

As you go through the course, you will be “gazing” at various charts to train your eyes. These charts will help you build depth of field in your vision, enhance dexterity with your eyes, recognize contrast between fields of energy, and distinguish between subtle colors of energy.

You will also be gazing at specific diagrams that accelerate the movement of Qi—or energy—in the energy centers of your body to open your “third eye” and facilitate your ability to see auras.

You will experience meditations that scour debris from your auric field, helping you see through your field so you can better see the auras of others. These meditations can also enhance your everyday activities and your state of health.

By the end of the first time through the course, you will have the experience of seeing auras. 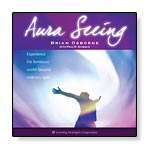 To the right is an image of the cover of the course. It is possible for you to see something like this when you develop your aura seeing skills. We created the image by adding an actual image of the aurora borealis or northern lights. This is a luminous phenomenon that consists of streamers or arches of light appearing in the upper atmosphere of a planet’s magnetic polar regions. It is caused by the emission of light from atoms excited by electrons accelerated along the planet’s magnetic field lines. It looks very much like a person’s aura can appear.

What can seeing auras mean for you?

Auras can tell you a lot about yourself and about another person, and seeing auras can help you better respond to situations. The energy field reflects all aspects of the body and mind. It is not possible to have a physical or mental disturbance (positive or negative) and have it not reflected in the aura field.

Seeing auras gives you more of a total view, a panoramic vision of any person, any group of people, and any situation. The more information you have, the better decisions you can make.

The applications are endless…

Health professionals: get to the core of someone’s issues.

Managers: assemble the most effective team that can work together

Sales professionals: see when a prospect really likes your offering

Speakers: know whether your audience is engaged with your message

Teachers: know when students really get it

Spiritual seekers: an aura is our spiritual signature. When you see a person with a bright, clean aura, you can be sure that such a person is good and spiritually advanced, even if they are not aware of it.

Brian has been brought into meetings as a business advisor. His job has been to simply look at everybody there and “see” them. He would know whether someone was acting uncomfortably because the items presented in the negotiations were outside their scope or whether that person was not divulging the whole truth.

At a party I noticed two people were spending quite a bit of time with each other. I relaxed my eyes so I could see their auras, and sure enough, their auras were reaching out to each other. They were dating!

If you’ve ever had a loved one in the hospital, you’ll love this story from Lynn who studied with Brian:

“This past summer we visited my mother-in-law in the hospital. She has severe dementia with no recognition of anyone and no language skills. She cannot make intentional movements and has a feeding tube. My father-in-law and sister-in-law began to have a heart-to-heart conversation. I noticed that my mother-in-law was beginning to glow with yellow light. As the conversation deepened, my mother-in-law glowed brighter and brighter.

“At the point where my father-in-law and sister-in-law hugged there was unbelievable light coming off my mother-in-law. It was so apparent she was part of that loving interaction that I could barely keep from crying. I really became aware of how ‘present’ she still is. I would never have known that if I could not see ‘the ethereal light.’ I am a secretary, but seeing has changed my perception of the world.”

At our Spring Forest Qigong Retreat, Wendy Greer who helped in the creation of the Aura Seeing course said she watched Chunyi Lin’s energy trailing him like a comet. Janie Solarski, who helped edit the course, commented how she now sees an aura emanating from a statue of Kwan Yin in the room we do our daily Qigong practice.

I was at a concert enjoying the music and the gorgeous aura of the show’s star. At one point she asked one of the musicians to join her in a duet. While his aura was beautiful, it was of no comparison to the star’s. But when he opened his mouth to sing, he instantly and immediately shined brightly. When she sang, his aura withdrew, but came out blazingly full every time he sang.

On another day I was walking from a concert, and I was looking down. Suddenly someone walked by with glowing feet. I looked up. It was the concert’s superstar. He was radiating.

At my nephew’s wedding, the love energy emanating from most of the congregation was beyond what I would have thought. And then as Jesse and Deanna lit the Unity Candle, their auras merged, right before my eyes!

When you can see auras, you see a dimension of life that has been here all along that you have been missing

Beyond the practical benefits of seeing auras in your day-to-day life… Beyond the physical beauty of seeing this luminous, subtle, moving and wafting, transposing, transforming energy… You see the connectedness of all living creatures. And this, my friend, I believe is the number one reason to learn to see auras.