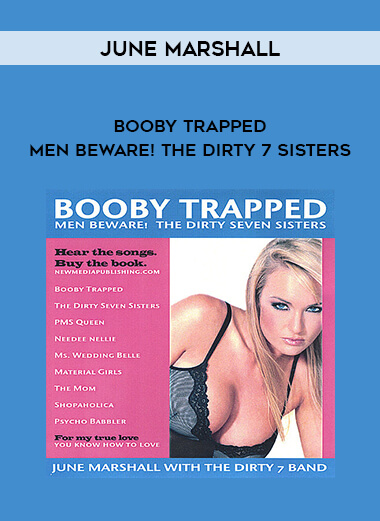 This dating guide shows how to overcome dating traps, use sex appeal as just one criteria, and how to best judge a suitable partner.

Guys,this is the book we need! I read this book and loved it. Thanks, June! — Chris Sellick

As men, my friends and I have often been mystified by outwardly attractive women who turn into a relationship nightmare after a few dates or after the marriage vows have been exchanged. I only wish we had a guide like this to help us avoid heartache, money, and time lost. Beauty and sex notwithstanding, these women are traps: They are incapable of giving your needs fair play. This is why they are called the Dirty Seven Sisters. You will recognize some or all of them, as you read this funny and witty treatment, including documented stories of female celebrities we seem to be so entranced by today.

All of us are driven by our genes to mate, an outmoded “matter over mind” state of affairs in the 21st century. “Mind over matter” rules science, technology, and more and more of all other human endeavors today. We are now able to directly manipulate genes, the blueprints of life. With this awesome power comes responsibility: To apply our minds to find the right mates. If we dont, we will let our genes and other minds (even computers, eventually) rule over us, as we fight or abandon our mates instead of building a happy and prosperous life for ourselves and our families.

You will laugh your way through to newfound wisdom as you read this book. My wish is that you enjoy and use it to the fullest.

I wrote this book after over thirty years of experience observing, being friends with, and helping other women and men. I sought to discover what made women good mates, wives, and girlfriends. I also began to understand what makes some women poor mates. After thousands of encounters with good and bad mate material, definite types and patterns emerged:

The Material Girl: It’s all about money, looks, and goods, honey

Shopaholica: You’re it (maybe), until a better deal

Wedding Belle: Wants the wedding and the kids, not you

The Mom: You become one of the kiddies too

These woman do not show a desire to understand your feelings. They are not worth the trouble you will surely have with them, no matter how beautiful they are. All Dirty Seven Sisters, except Needee Nellie, share this non-empathic trait. They are too self-involved, or busy getting what they want from you, to be interested in understanding what makes you happy.

June Marshall, author of Booby Trapped: Men Beware! the Dirty Seven Sisters and The Dirty Seven: Ladies Beware! was born in Sao Paolo, Brazil to American parents. They moved back to the United States while she was a child. After finishing college, she went to New York to study acting and singing, along with earning a Masters in English Literature.

She then moved to Europe, where she lived in Belgium and visited the major cities of the continent. Next came her “Passage to India,” where she traveled from its southernmost tip to the Himalayas. Her familiarity with diverse cultures of the world originates from these experiences and flavors her unique philosophy. It has also greatly contributed to her understanding of human nature.

Her career, so far, has included being a Writer, Public Speaker and Speech Writer, English Teacher, Actor-Singer, and even being Webmaster and Systems Usability Engineer at AT&T.

She has appeared on television and radio as well as given talks and seminars on the topic of mateability, behavioral standards, and selectivity in the dating arena. She has also written numerous articles for various publications.

Her concepts for her first two books took shape in 1981 when she was newly single in New York City, after a divorce. She noticed that certain types of men (The Dirty Seven) and women (the Dirty Seven Sisters) were actively seeking life partners and yet they were not behaviorally or emotionally equipped to sustain such relationships. She observed the havoc wrought in her friends’ and acquaintances’ lives by these unsuitable mates.

Twenty years later, she was again single and out in the dating marketplace. Once again these types asserted themselves. The idea had stood the test of time. The Dirty Sevens are still out there, actively seeking mates. They are still as unsuitable for consumption as certain types of poisonous mushrooms, which may look tempting but are deadly.

Not one to sit on her laurels for long, she is already at work on her next-to-be published book, The Second Marshall Plan: Making the World Safe for Love and Happiness. It will present her approach to some of human life’s deepest issues: The search for meaning, the need for love, and social structures that impede what they purport to achieve.

June has two grown daughters and lives in the New York metropolitan area.