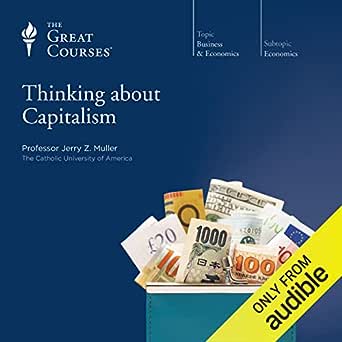 As the economic system under which you live, capitalism shapes the marketplaces that determine where you live and work, how much you are paid, what you can buy, what you can accumulate toward your retirement, and every other aspect of a society based on monetary exchanges for goods and services.

In an era of increasing globalization, capitalism has dramatically strengthened its important role in—and its influence on—the world economy. It is the system under which a majority of the world’s population lives, and it continues to strengthen the links of interdependence between the world’s economies.

But capitalism’s impact is about much more than money and markets. Indeed, capitalism is every bit as much a social force as an economic one. As such, its impact on noneconomic life has drawn the attention of thinkers outside of economics, as well as those inside the discipline, including some of its greatest minds.

In Thinking about Capitalism, award-winning intellectual historian and Professor Jerry Z. Muller of The Catholic University of America takes you deep inside the perspectives on this most important and pervasive force. Over 36 engaging lectures, you gain fresh insights that will strengthen your understanding of capitalism’s rich history, its fascinating proponents and opponents, and its startling impact on our world.

An Exploration Beyond Economics

Drawing on his exceptional ability to frame each thinker’s concerns within its historical context, Professor Muller takes you beyond economic analysis to look at how some of the greatest intellects have thought about capitalism and its moral, political, and cultural ramifications.

Covering capitalism from its 17th-century beginnings to today’s era of globalization, Professor Muller explores these thinkers’ insights on some wide-ranging questions:

As capitalism continues to expand across geographical borders, provocative questions emerge about its overall impact. What are the short- and long-term implications of globalization? How and when should we construct economic policies to strengthen or limit its growth? Can capitalism ever undermine itself?

By placing capitalism in its full societal context, Thinking about Capitalism enhances your ability to consider, discuss, and answer these and other critical questions—whatever your point of view.

Get Insights from Three Centuries of Thinkers

For almost three centuries, some of the most interesting thinkers in history have grappled with capitalism. They have explored its key features, cultural prerequisites, and human implications with excitement, caution, or even fear.

Their writings have defended capitalism, argued against it, disagreed over how to characterize it, and questioned whether the human costs incurred in its practice can be outweighed by the obvious material benefits it brings.

These are some of the great minds you encounter in these lectures:

Their insights can prove invaluable in every area of your life. They can surface in the decisions you make about family, work, and consumption; and they can give you a more thoughtful perspective on the ideas and behaviors of commentators, corporations, and governments.

A Fascinating Journey Led by an Ideal Teacher

An intellectual historian, Professor Muller takes you from capitalism’s beginnings in commercial Holland and England to the challenges of nationalism, globalization, and contemporary varieties of capitalism.

Genial and disarming, he connects the dots from idea to idea, thinker to thinker. In Thinking about Capitalism, you can finally grasp the history and the concepts of this vital economic system, as well as its importance on the global economic stage and in your own life.