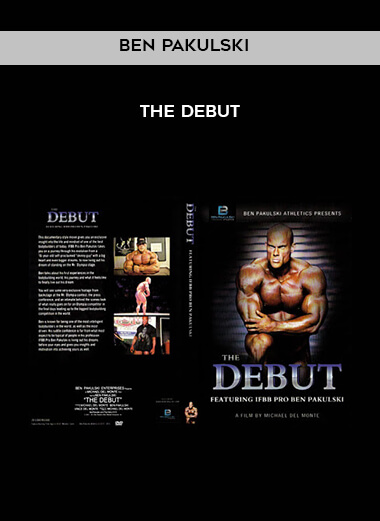 Ben Pakulski’s newly released documentary film “The Debut” has created a buzz of excitement among aspiring bodybuilders and fitness enthusiasts, receiving rave viewer reviews around the internet, and prompting a write up by DietsAndFitnessGuides.com’s Shana Simon.

“Ben Pakulski’s quick rise to the top has inspired many in the bodybuilding and fitness community,” reports Simon. “Because a number of our website visitors are folks looking to get into professional bodybuilding, we were quite eager to review ‘Big Ben’ Pakulski’s film and share our thoughts on it with our audience.”

The Debut, which has already been compared to Arnold Schwarzenegger’s classic bodybuilding film Pumping Iron, follows Ben Pakulski’s final 5 days of preparation before taking part in the 2012 Mr. Olympia bodybuilding competition. Full of human drama, the film shares an inspiring father-son relationship and the story of young man who burst onto the bodybuilding scene to accomplish his life long dream of standing on the Mr. Olympia stage.

Shana Simon shares this explanation for the films popularity:

“Ben Pakulski, alternately known as ‘BPak’ and ‘Big Ben’ is a fan favorite, and his story of going after his dreams is something that resonates powerfully with his fans,” says Simon. “The kind of people who get into bodybuilding, or any other competitive sport are people who enjoy focusing, and working towards goals, and it’s inspirational to watch stories like this, that we can all relate to and that keep us motivated and pumped up to go after our own dreams.”

The Debut is currently being offered at a 50% discount, with the added complimentary bonus of Pakulski’s 21-Days Out Olympia Diet, the exact nutrition plan Pakulski followed to get himself into condition for the event. In addition to detailing Pakulski’s approach to manipulating his carb intake on training and non training days, the program also details Pakulski’s supplementation regime, his approach to the depletion phase, and even the specific details on the exact meals Ben consumed.

Those wishing to purchase “The Debut” at the discounted rate, or for more information, click here.