Atheist Convention 2010 – The Rise of Atheism

SKU: 188189 Categories: Everything Else, Uncategorized Tags: Atheist Convention 2010, The Rise of Atheism 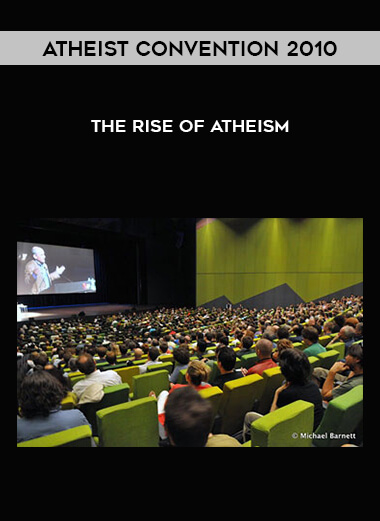 Atheist Convention 2010 – The Rise of Atheism

Sending a strong message that atheism is gaining momentum as a political issue in Australia, thousands of non-believers will gather in Melbourne next March for a major international convention: The Rise of Atheism. The Melbourne Convention and Exhibition Centre has been booked for the event which is set to become the largest gathering of non-theists in Australia’s history.

President of the Atheist Foundation of Australia (AFA), David Nicholls, says that inquiries about the convention have exceeded all expectations and interest continues to grow as organisers confirm some of the leading names of the ‘New Atheism’ movement as speakers.

The enormous contemporary interest in atheism as a social and political movement has been fueled by global religious conflicts and the increasing politicisation and influence of the ‘religious right’. A number of best-selling books on the subject, including Dawkins’ The God Delusion, Sam Harris’ The End of Faith, and Christopher Hitchens’ God Is Not Great: How Religion Poisons Everything, have inspired thousands to join non-theist organisations and online atheist communities.

AFA president, David Nicholls says, “Non-religious Australians are fed-up with an unrepresentative Christian minority influencing important civil rights issues like abortion, euthanasia, stem cell research and gay marriage – all issues which the majority of Australians support. They’re also concerned about the amount of tax-payers’ money being pumped into religious schools at the expense of the public education system.”

“People contact us at the Atheist Foundation every day, saying, “What can we do to stop this?” says Nicholls.

Surveys show that only 7.5% of Australians attend church regularly. While the official Census figures show Australia’s ‘non-religious’ make up 20% of the population, several major international studies reveal that this figure is vastly underestimated. Nicholls estimates that non-believers in Australia are probably closer to 50%.

The Rise of Atheism Convention will bring together atheists from around the country, and across the world. “Make no mistake,” says Nicholls, “this is not just going to be a talk-fest. The incredible level of interest should be a huge wake-up call to politicians and Christian lobbyists, alike, that non-religious Australians are preparing to stand-up and be counted. Atheism is on the rise, and the non-religious will no longer sit quietly on the sidelines while good policies are derailed by religious dogma and prejudice.”

A survey by Germany’s Religion Monitor (2008) found that 31% of Australians do not believe in God, a divine power or life after death, while a further 26% were uncertain to varying degrees. Source: Religion Monitor (2008), ‘Australia: High level of religious identity paired with low level of Belief’, Bertelsmann Stiftung Foundation, Sydney/Gütersloh (Germany)